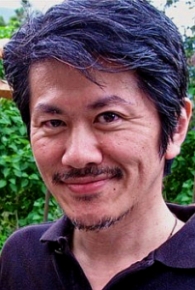 "I decided to become an artist in order to know Leonardo da Vinci. It was not enough to read books and watch the TV programs. I had to experience what it means to be an artist/artisan. I've even trained my non-dominant left hand to be able to draw. I will keep researching until the end!"
- Hikaru

Hikaru is a citizen of the archetypal world beyond the boundaries of folk, tribal, race oriented identities.

Of course, part of him embodies the genuine Japanese aesthetic, as his maternal great grandfather, Yasujiro Jr, who was an Imperial Court - appointed artisan (the Purveyor to the Japanese Imperial Household). His gift shop and the studio-workshop was visited by the Court. Hikaru's great great grandmother was a wet nurse (Meno toh・乳母) to one of the Emperors (Emperor Hirohito's father / Taisho Emperor) which made Hikaru's great grandfather and Taisho Emperor the foster brothers.
His maternal grandfather had received the medal of honor （勲五等）from Emperor Hirohito for being a dedicated middle school principal.
Hikaru's mother was educated at Waseda University when only few women were allowed. She was one of the members of the Yubenkai (the elite debating/oratorical society which produced numerous Prime Ministers, etc), and she and late Mr. Nishioka Takeo, the former Minister of Education and the 28th President of the House of Councillors of Japan were best friends for over 50 years.

Hikaru's initial training in art, music, and writing had begun when he was four years old. As Leonardo da Vinci, whom Hikaru has followed since he was ten, he is a man of many expressions: art, music, dance, acting, writing, and teaching. He has shown some interest in the US government and have visited Washington D.C. and Langley as well.
Hikaru is one of the few non-government/military related Japanese national persons to have visited Langley.
While in Washington D.C., he had interviewed briefly with late Mr. William Colby, the former director of CIA.
Hikaru aspires to be the international liaison and the Goodwill ambassador. 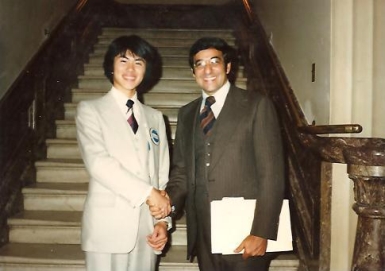 Hikaru with then congressman, now former Director of the Central Intelligence Agency and Secretary of Defense, Mr. Leon Panetta (1981)
As an artist, Hikaru is a true Mannerist.  He also creates the abstract and mixed media assemblage art pieces. In the mixed media pieces he has been using the technique similar to the traditional Japanese "hariko" method. Hikaru also values the highly imaginative artistic expression of the prehistoric Johmon/Jōmon (縄文) culture of Japan. The spirit of Jōmon (縄文) lives in Hikaru's works. However, even in the abstract works, he is manneristic.

As with Gerhard Richter, Anselm Kiefer, and Max Ernst, Hikaru simultaneously has many styles of expression, and he maintains that one of the reasons for having the multi-expression is that 1) we humans do have figures/forms, living with the beings with forms; 2) we humans think abstractly - using abstract concepts; 3) we all are surround with materials/things/stuffs; 4) we all are under influence of the laws and the "shapes" of the subatomic reality which we cannot "see".

Yet most importantly, Hikaru treats and uses the various styles and concepts as Duchampian "Ready-Made" and not just the ready existing objects and forms.  In a way, Hikaru is like the Chamaeleonidas and Gracula religiosa of the art world.

His art has been shown in Europe (Germany, England, Italy, France, Greece, etc), Japan, Australia, and the U.S.A.

Hikaru is listed in the 5th Edition of "Who's Who Amongst America's Teachers," and his portfolio is on file at the Etude department (Documentary research section in the Paintings department) of the Louvre Museum via the recommendation from the former Director of the Painting Department (now President of the Louvre Museum), Pierre Rosenberg. He is also listed in the First edition of Lexikon der Phantastischen Kunstler (Encyclopedia of the Fantastic Artists) along with Salvador Dali, Giuseppe Arcimboldo, Francis Bacon, etc.

Hikaru was one of the featured speakers for the TEDxBoulder 2015, and his presentation can be viewed via youtube.
Here is the direct link:  https://www.youtube.com/watch?v=nrHhqsMADNY

Hikaru is planning to publish his life long research on the life and the works of Leonardo da Vinci . This research is very unique, for he is approaching not from the point of view of the academics (art historians) but as a practicing artist and the teacher.
As Rudolf Steiner considered Education as Art, Hikaru considers Research and its Presentation as Art.
Hikaru is a wonderful acrylic artist / painter! Many of the artworks by Hikaru on this site is available for purchase!
画家宫川 光 Hikaru Miyakawa:1961年出生于日本箱根。幻想世界
Google Analytics